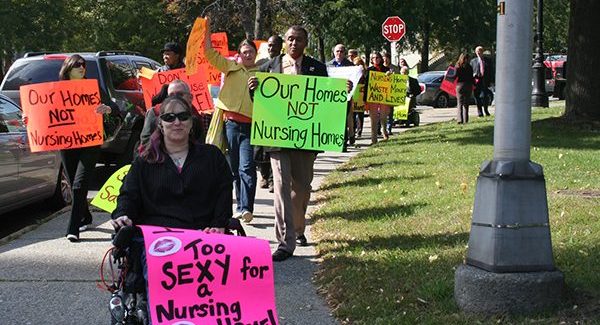 Consumer Directed Choices was founded by the late Constance Laymon to empower people to choose their own home care.

In 1984, at the age of 17, Constance sustained a spinal cord injury. When thinking back on this time in her life, Constance spoke of feeling “pinned to the wall” by depression and hopelessness. She drifted aimlessly for the next few years, uncertain of what she was supposed to do now that everything had changed. She eventually found a path that changed her life, and the lives of thousands, for the better. Constance was dedicated to making it possible for people with disabilities to self-direct their own home care.

Constance discovered her life’s work after accepting a job at the Capital District Center for Independence. She learned about consumer-directed care, an alternative to traditional home care, through her new position and helped develop a personal care program called Consumer Directed Personal Assistance (CDPA) to offer people with disabilities more autonomy in their home care. As a user of CDPA herself, Constance saw firsthand the power of the self-direction model.

After fiscal problems at the Center ended her position, she refused to give up on the idea of a self-direction model. Volunteering her own time and money, Constance began laying the groundwork for a new not-for-profit organization that would serve as an alternative to traditional home care for people who wanted to use CDPA for their home care. Constance founded Consumer Directed Choices, Inc.in January 1997. CDChoices eventually became operational in December 2001.

CDChoices flourished as others learned how the self-directed care model could restore their independence. Constance earned recognition as both a successful businesswoman and a champion of self-directed living. She was named a Pioneering Woman of the Capital Region in 2003 and received the Beacon Leadership Award from the Independent Living Center of the Hudson Valley in 2011.

Constance advocated tirelessly for systems change and against the unnecessary institutionalization of individuals with disabilities. She advocated for the expansion of CDPA to include consumers who were not self-directing but required a designated representative to use it, enabling more people to access self-directed home care. She was a frequent participant in rallies supporting CDPA and opposing Medicaid cuts in both Albany and Washington.

Constance passed away unexpectedly on September 21, 2012, at 46 years old. After her death, CDPAANYS created the Constance Laymon Excellence in Leadership Award. The Home Care Association of New York State (HCANYS) retrospectively awarded her its highest honor, the Ruth F. Wilson Award. Constance was among the first inductees into the New York State Independent Living Council Disabilities Rights Hall of Fame.

Constance herself was an example of both determination and self-determination. Although her life was too short, hers was a life worth living because she chose to make it so. Constance’s advocacy for social justice has brought hope to thousands of people with disabilities. She left a legacy of courage and dedication that continues to inspire us all.

While Constance herself is gone, her memory and work guide us every day. CDChoices has given thousands of people with disabilities the chance to reclaim control over their care with self-direction. We continue to be run both by people with disabilities and by advocates who share Constance’s dream of changing the way home care service is delivered. Constance’s passion for a self-directed living started but did not end with herself.

To listen to Constance communicate overcoming challenges in her life and explaining the role of CDPAP and CDChoices, we encourage you to view the below videos.